The South Copeland GDF Community Partnership has opened discussions with international communities who have experience of the geological disposal siting process to exchange knowledge and understanding.

The Mayor of Ignace in Canada, Penny Lucas, and the Chair of the Ignace Community Nuclear Liaison Committee (ICNLC), Brad Greaves, gave a presentation online to the South Copeland GDF Community Partnership on a selection of key topics and issues which had been requested in advance by members.

A Geological Disposal Facility (GDF) is an underground facility designed to safely and securely dispose of higher activity radioactive waste. Community Partnerships are long-term groups made up of local people, the GDF developer and local authorities to consider the possibilities of hosting a GDF within an identified Search Area.

In South Copeland, the Search Area includes the electoral wards of Millom and Black Combe & Scafell.

Community Partnerships have formed in South Copeland, Mid Copeland and Allerdale to discuss the potential of hosting a GDF for the UK’s higher activity radioactive waste. Theddlethorpe in Lincolnshire also intends to form a Community Partnership, and conversations are progressing across the UK, with additional communities expected to join the siting process.

The process of selecting appropriate locations for GDFs is underway in several countries – including the UK and Canada. This comes following scientists and governments around the world recognising that geological disposal is the best option for managing longer-lived, more hazardous radioactive waste, and follows decades of science, technology and engineering research.

In Canada, 22 communities initially registered interest in hosting a GDF. Communities were gradually ruled out through surveys, suitability studies, geology and opting out of the process. There are now two communities remaining, Ignace and South Bruce, both in Ontario, but about 1,000 miles (1,600 kms) apart, and preparations are being made for detailed site evaluations. There will also be a Test of Public Support before a final decision is made in 2023.

In order to progress in the UK, delivering a GDF requires a suitable site and a willing community. In South Copeland, deep geology beyond the coast is being considered for siting the underground elements of a GDF. This means a surface facility on, or near, the coast would provide access to a disposal area deep in rock beyond the coast. If a suitable site is found in South Copeland – a decision which could take 10-15 years – a Test of Public Support to give people a direct say would be held with those living in the wards affected. Without public support the project would not go ahead.

Ged McGrath, Chair of the South Copeland GDF Community Partnership, said: “We were pleased to be able to speak to representatives of the Ignace Community Nuclear Liaison Committee in Canada, to understand more about their siting process, the ways in which the local community has engaged, and the benefits the process has brought and a GDF will bring to the area if it is selected.

“There is a lot that we can learn from Ignace and other communities who are considering the possibility of, or are developing a GDF, and I look forward to our Partnership continuing such conversations as we continue to engage with and understand the views of our community here in South Copeland.

“Local residents make the decision as to whether or not they want a Geological Disposal Facility, and the Community Partnership’s role is to ensure that the community has all of the relevant information that they need about the process.”

The South Copeland GDF Community Partnership are holding a series of exhibition events to help people to ask questions and find out more about what a Geological Disposal Facility (GDF) is and what the siting process means for the South Copeland Area. 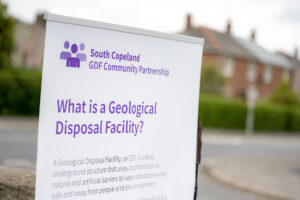 The next events are:

Further information on local events and how to get involved can be found at: https://southcopeland.workinginpartnership.org.uk/get-involved/

Other ways to contact the Partnership include email: gdfinfo-southcopeland@nda.gov.uk or telephone 0300 369 0000.

GDF events to be held in South Copeland