Surveys are due to take place off the coast of Mid and South Copeland for around three – four weeks this summer between July and August to deepen understanding about the nature of the deep rocks beyond the coast. This is part of the work required within the siting process for the underground elements of a Geological Disposal Facility (GDF).

We asked Chris Eldred, Senior Project Manager in the GDF Programme, some questions about the surveys.

1 – What are marine geophysical surveys?

Marine geophysical surveys use sound energy to map geological structures under the
seabed. Surveys use techniques that are routine in the oil & gas and offshore wind
industries. These techniques are similar to the ultrasound imaging that’s widely used in medicine.

Marine geophysical surveys involve creating a sound from a source (commonly using high pressure air) below the water surface, which is towed behind a vessel. The echoes that reflect back from the different layers deep underground are collected using receivers (hydrophones) that are trailed behind the boat as streamers (see images of Shearwater Bly below, the vessel that will be used for Copeland surveys, plus an indicative image of streamers being towed). 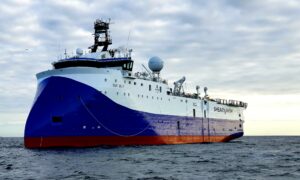 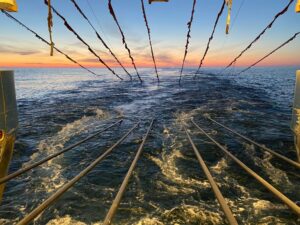 Surveys can generate two dimensional and three dimensional images of the deep geology, either below the land or below the seabed, providing information about the thickness, layering, and depths of the different rock types in particular geographical areas.

2 – Why are you doing these surveys?

During the formation of the Mid and South Copeland Community Partnerships it was recommended that a better understanding of the deep geology in coastal environments off the coast of Copeland was the focus of initial investigations. We, as the GDF developer need to understand the underground geology so that we can start to consider if this area could make a suitable site for a GDF.

This includes identifying suitable underground layers of rock in which to build a GDF and determining how far underground they are. This data will give the geologists, scientists and engineers some of the tools they need to begin designing and planning future work. The information we obtain will help to better understand whether a location could host a GDF, which will in turn help discussions with communities in the Search Area.

These surveys will take around 3-4 weeks as part of a continuous 24 hour operation taking place 5-20kms off the coast.

4 – What will members of the public onshore be able to see and hear whilst the surveys are taking place?

The vessel will be at least 5km offshore so it is very unlikely you will see or hear the vessel from the shore except for a row of lights at night on the horizon.

5 – Will there be any preparatory work required beforehand which members of the public may see from shore or at sea?

A short scout survey to identify fixed gear fishing equipment will take place in early May. This is to identify any equipment in the main marine geophysical survey area that may need to be removed for the duration of the survey later in the summer.

6 – Can members of the public still use the beaches during this time?

These surveys will not affect normal use of beaches or the ability of the public to swim in the sea and other recreational purposes.

7 – Will the surveys affect other users of the sea?

Other sea users such as diving operations or leisure activities at sea will be notified about the surveys well in advance as the area of the survey will be off limits during the survey period for safety reasons.

Commercial fishing operations will be notified of the survey duration, dates and areas of operation which will enable them to manage their own activities accordingly and continue to supply the onshore markets.

The GDF Programme is developing a marine cooperation scheme for businesses whose commercial activities may be affected by these surveys using methodology developed by the off-shore wind industry and also used by other developers. It will look familiar to fishers and other marine users.

8 – Will you use local harbours during the survey period?

The main survey vessel will commence its journey from Liverpool and return there. It will not use a local harbour during the survey period as it will be at sea for the whole survey period.

The guard and scout vessels will leave from Fleetwood in Lancashire and return there.

A support contractor will be based out of Whitehaven harbour during the survey period to support safe and secure operations.

9 – Who regulates and monitors the surveys?

Activities in English coastal waters are regulated by the Marine Management Organisation (MMO) which is responsible for granting marine licences and preparing marine plans.  Other regulators include Natural England (the Statutory Nature Conservation Body for inshore waters) who provide environmental advice to the MMO on licence applications and exemptions.

The GDF Programme has engaged with both regulators on our proposals and associated environmental assessments.

10 – How will you protect sea life when carrying out these surveys?

To protect the marine environment and to fulfil its responsibilities, the GDF Programme has undertaken marine environmental assessments to identify any ecological impacts associated with surveys and to support requirements set out in legislation and regulations. We will follow relevant guidance set out by the Joint Nature Conservation Committee (JNCC) on reducing and avoiding impacts from surveys, and by using appropriate measures such as Marine Mammal Observers to ensure the survey doesn’t start when marine mammals are in close proximity to the survey vessel.

11 – How will you avoid polluting the sea?

Shearwater, the owner of the survey vessel will apply good industry practice and requirements and as part of this they will also not discharge any wastes during the operation.

Shearwater will aim to remove old lost fishing gear and debris from the sea during operations, if it has the potential to get caught in the survey equipment. This will help “clean up” waste, such as plastics, from our coastal waters and protect marine wildlife.

12 – Does the survey disturb or interfere with fishing and deplete fish stocks?

Environmental assessments have been undertaken, discussed with regulators, and show that there will be no significant impacts on ecology including on fish spawning and nursery grounds.

13 – What happens after the surveys are completed?

Following the surveys there will be an extended period of analysis of the data – around nine months duration.

The main survey vessel and equipment and any related support vessels will leave the area and return to their respective ports in other locations.

In accordance with Joint Nature Conservation Committee (JNCC) guidance, the GDF Programme will submit details of the survey into the UK’s Marine Noise Registry and will also submit reports to the JNCC on all sightings of whales and dolphins which forms part of the UK Marine Strategy.

14 – What will it tell us and where will information be available?

The surveys will provide information about the deep geology of the survey area and help inform understanding about suitability for a GDF.

The findings will be published and publicly available on NWS’ website as well as through the Community Partnership websites.

15 – If the geology is right does this mean a GDF would go ahead here?

No. The siting process for a GDF is based on finding a ‘willing community’ and a suitable site.  If a suitable site is found in Copeland – a decision which could take 10 -15 years – a Test of Public Support to give people a direct say would be held with those living in the electoral wards affected, subject to agreement from Nuclear Waste Services and the Secretary of State in accordance with the Governments’ Implementing Geological Disposal- Working with Communities policy (available here).

16 – Are you doing similar surveys in other areas?

Yes, surveys are expected to be carried out in other communities following Community Partnership formation and in discussion with them. Environmental assessments will be undertaken and the necessary permissions obtained for each survey.

If you have any questions or concerns about these surveys please contact the GDF Programme: gdfenquiries@nda.gov.uk.  The GDF Programme is delivered by Nuclear Waste Services.